By Jeff Davis on September 20, 2014 in socialism, United Nations 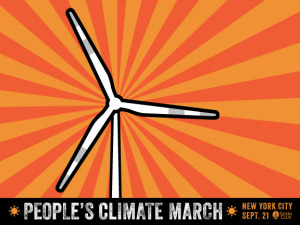 Sunday they got 20 inches of snow in Wyoming, and the day before it snowed in South Dakota and Colorado. Here in New Jersey this morning, it was only 41 degrees. And according to the calendar, it’s still summer!

Oh–and both the Arctic and Antarctic ice fields are growing big, big, big…

But never mind all that! The real problem is Global Warming! And so, later this month (Sept. 21), in collusion with the UN Climate Summit, complete with poetess and Global Warming poems, we’ll have… The People’s Climate March.

Got a barf bag handy? Well, you’d better get one, because I’m going to quote from their press release. Take a deep breath; here goes.

“This is an invitation to change everything. In September, world leaders are coming to New York City for a UN summit on the climate crisis. UN Secretary General Ban Ki-moon is urging governments to support an ambitious global agreement to dramatically reduce global warming.” [Editor’s note–It’s reducing itself, you numbskulls.]

“With our future on the ljne and the whole world watching, we’ll take a stand to bend the course of history. We’ll take to the streets to demand the world we know is within our reach: a world with an economy that works for people and the planet; a world safe from the ravages of climate change; a world with good jobs, clean air and water, and healthy communities.”

Remember, comrades: The People’s Climate March is “centered on justice… committed to principles of environmental justice and equality–representing the communities that are being hit the hardest by climate change.”

17 Responses to The People’s Climate March