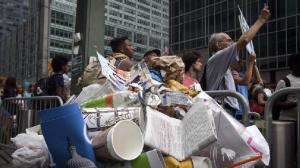 “Their love for the Earth is so real, they couldn’t even use a trash can,” tweeted a disgusted @chelsea_elisa, along with a photo of an overflowing trash can in Manhattan, after tens of thousands of marchers invaded the city on fleets of smog-producing buses.

“Somehow this doesn’t seem too green 2me,” Kreutzer tweeted.

He and other critics of the People’s Climate March called the protesters hypocrites for wasting paper and burning fossil fuel in getting to the big event.

“The hypocrisy varies from person to person,” economist Kreutzer, 61, told The Post. “The ones that fly in on private jets are the most hypocritical.”

He was referring to celebrity A-listers who joined Sunday’s march.

Stars such as Leo DiCaprio and Mark Ruffalo, an outspoken opponent of fracking, paraded through Midtown with people from around the country.

11 Responses to Garbage March for Climate