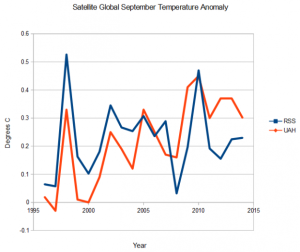 Media outlets have been tirelessly reporting new data claiming that September 2014 was the hottest on record, according to the National Oceanic and Atmospheric Administration.

This runs counter to media reports citing NOAA figures that this is the fourth heat record-setting month in a row. NOAA says the globe averaged 60.3 degrees Celsius last month — the hottest September ever going back through 135 years of record-keeping. NASA data also shows that last September was a record-setting month.
Read more at Barbwire

5 Responses to Warmists Wrong Again: September Was Not The Hottest On Record