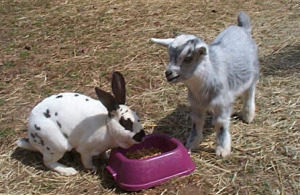 Alpine goats are shrinking due to climate change, researchers have claimed. Scientists from Durham University say that the goats now weigh 25 percent less than goats of a similar age thirty years ago, and blame the shrinkage on the region’s changing climate.

The researchers said the speed of the decline in the size of the goats has taken them by surprise, calling it “astonishing” and saying that the future of the species could be under threat.

The team used long-term records on the body weights of Chamois goats provided by hunters and compared them to changing temperatures in the region. They say that while the goats’ size has decreased, average temperatures have risen by three to four degrees centigrade.

However, while most studies linking shrinking animals to climate change have blamed the increasing scarcity of nutritional food, this study found no evidence that the Alpine meadows had declined in productivity. The team instead blame higher temperatures for changing how the goats behave.

View all posts by Jeff Davis →
Warmists Wrong Again: September Was Not The Hottest On Record
‘Terminate Industrial Civilization’ To Save Earth, But Not Mankind, From Global Warming