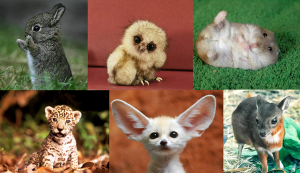 Have you ever wanted to get paid to stare at cute animal photos all day? The National Science Foundation will fund that!

NSF gave the Michigan State University $227,437 to study animal photos appearing in National Geographic magazine from 1888 to 2008. Specifically, researchers looked at 108 photos to see how they “make salient the problem of a changing climate.”

Lawmakers, however, are not happy that NSF decided to fund this animal photo study while rejecting funding to other studies, including studying ethics of cyber-warfare, stemming pandemic diseases from spreading in Africa and the looking into the hurdles of quantitative climate modeling.

“All government employees and their agency heads need to remember they are accountable to the American taxpayer who pays their salary and funds their projects,” Rep. Lamar Smith, a Texas Republican who chairs the House Science & Technology Committee. “But the NSF is playing possum after awarding a researcher more than $227,000 in taxpayer dollars to thumb through pictures of animals in old National Geographic magazines.”

The only study to come out of the huge taxpayer grant found that “popular science is contributing to an expanded public discourse on climate change that extends beyond the vulnerability of iconic wild megafauna to include insects and amphibians and issues facing the relationship we have with other animals, such as the widespread consumption of animals for food.”

According to MSU’s proposal, access to National Geographic’s photo archives required taxpayer funding. But a Daily Caller News Foundation internet search found that National Geographic has thousands of animal photos available on its website for free.

View all posts by Jeff Davis →
More Bad News For The Global Warming Alarmists…
Warmists Wrong Again: September Was Not The Hottest On Record

3 Responses to Feds Spend $227,437 To Study Climate Change By Looking At Animal Pictures