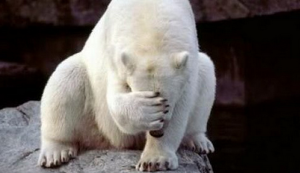 The cause of climate alarmism has been struck another near-fatal blow by a new study from a NASA research team at the Jet Propulsion Laboratory in Pasadena, California.
Using a combination of satellite observations and direct measurements taken by a network of 3,000 floating Argo temperature probes, the NASA team set out to calculate temperature changes and thermal expansion in the deep ocean (below 1.24 miles).

What they have found is that the deep ocean has not warmed measurably since at least 2005.

This unfortunate discovery represents a major problem for the climate alarmists because the “missing heat” supposedly hiding in the deep oceans has long been their favoured explanation as to why there has been no measured “global warming” for the last 18 years.

43 Responses to More Bad News For The Global Warming Alarmists…