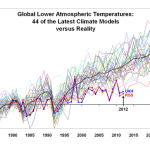 THE PUBLIC are becoming ever more sceptical of climate change as they begin to ask ‘where is the global warming we were promised?’, a leading scientist has claimed.

This week saw the 18th anniversary since the Earth’s temperature last rose – something that Dr Benny Peiser, from the Global Warming Policy Forum, says experts are struggling to understand.

He explains that we are now in the midst of a “crisis of credibility” because the global warming – and accompanied ‘Doomsday’ effects – that we were once warned about has not happened.

Scientists from the Intergovernmental Panel on Climate Change (IPCC) once predicted a temperature rise of 0.2 degrees per decade – but are now baffled by the fact our planet’s temperature has not increased for almost two decades.

Speaking exclusively to Express.co.uk, Dr Peiser said: “What has happened is that the public has become more sceptical because they were told we are facing Doomsday, and suddenly they realise ‘Where is the warming that we were promised?’”

“They say we can predict the climate and the reality is that they can’t.”

Read the rest at: Express