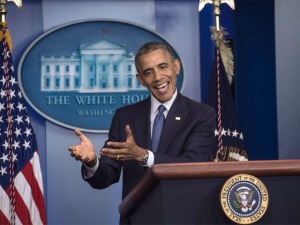 On Tuesday, shortly after announcing to the American public that the United States was now bombing ISIS in Syria, the President of the United States flew to New York to address the United Nations – on climate change. His speech mixed high-flown sentiment with apologies for America, and pledged American sacrifice in the name of a lofty goal without evidence that such sacrifice would in any way contribute to attaining that goal.

In other words, it was a typical Barack Obama whirligig.

Even as American warplanes struck targets in Syria, even as regimes tottered in Jordan and Iraq and Yemen, among others, even as the Japanese economy collapses and the economies of India, China and Brazil shake, even as Ebola virus runs rampant through Africa, Obama announced that terrorism, instability, inequality and disease represented secondary threats. “There’s one issue that will define the contours of this century more dramatically than any other,” Obama said, “and that is the urgent and growing threat of climate change.”

Read the rest at Breitbart

6 Responses to Obama to UN : 'Climate Change' Our Fault