By ManBearPigHunter on October 29, 2012 in GREENgate 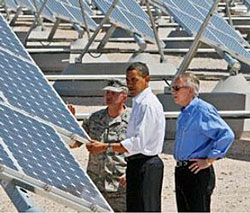 In his weekly radio address on July 3, 2010, President Barack Obama announced that “the Department of Energy is awarding nearly $2 billion in conditional commitments from the Recovery Act to two solar companies.” Neither of them was named Solyndra.

One of the two companies Obama did name was Fort Collins, Colorado-based Abound Solar, which Obama touted as a company which would create “more than 2,000 construction jobs and 1,500 permanent jobs” at two new plants which “When fully operational … will produce millions of state-of-the-art solar panels each year.” As Amy Oliver detailed at Townhall a year ago, Abound is a classic case of Obama bundler cronyism. In July, just shy of two years after Obama’s address, the company, which benefited from $400 million of Department of Energy loan guarantees, filed for bankruptcy. Yesterday, a Colorado District Attorney announced a criminal investigation.