By ManBearPigHunter on October 30, 2012 in Cause/Effect 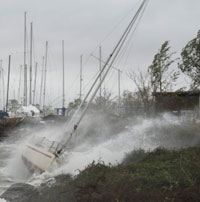 Every time there’s a massive weather event — like Hurricane Sandy affecting much of the East Coast early this week — climatologists are called upon to answer the question of whether this weather is evidence of global warming. And while most would say an individual weather event cannot attributed as evidence of global warming, the link is still being made.

In fact, some climate scientists are taking a closer look at individual weather events and making an effort to quantify climate change’s role in contributing to it.

Although trends in changing climate are generally tracked over years, not just by the weather outside your window, as it’s often put, NPR’s Adam Frank reported several researchers are looking at various aspects of individual weather events and the influence of climate change:

Researchers like Randall Dole of NOAA, for example, might ask what percentage of an extreme event’s magnitude came from a changing climate. Peter Stott of the UK Met Office frames the question differently. He looks at the odds for a given extreme weather event to occur given human-driven climate change. Kevin Trenberth of NCAR takes a third view, asking: Given a changed background climate, how should we expect weather to change?