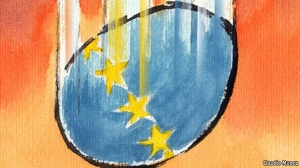 Discussions on the European Union’s negotiating position at upcoming UN climate talks ended inconclusively last night (25 October) because of divisions over whether tradeable emissions allowances should be carried over to the next period of the Kyoto Protocol.

The first period of the protocol finishes at the end of the year, and most countries do not want it to be extended. At UN climate talks in Durban last year, the EU agreed to organise a second commitment period effectively on its own, in exchange for other major emitters agreeing to a future climate deal by 2015.

The details of that second commitment period must be worked out at this year’s summit, in Doha. But EU member states are divided on the issue of whether to carry over excess credits (AAUs) from the first period into the second period. Poland is blocking adoption of any EU position that would eliminate these excess credits, a move called for by the G77 group of developing countries and all western European countries.

Opponents of carrying over the credits say it would render a second Kyoto commitment period meaningless, because central and eastern European countries were over-allocated allowances due to their rapid de-industrialisation in the early 1990s.

One Response to EU In Disarray Over Future Climate Policy