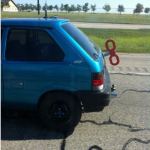 Electric cars are promoted as the chic harbinger of an environmentally benign future. Ads assure us of “zero emissions,” and President Obama has promised a million on the road by 2015. With sales for 2012 coming in at about 50,000, that million-car figure is a pipe dream. Consumers remain wary of the cars’ limited range, higher price and the logistics of battery-charging. But for those who do own an electric car, at least there is the consolation that it’s truly green, right? Not really.

For proponents such as the actor and activist Leonardo DiCaprio, the main argument is that their electric cars—whether it’s a $100,000 Fisker Karma (Mr. DiCaprio’s ride) or a $28,000 Nissan Leaf—don’t contribute to global warming. And, sure, electric cars don’t emit carbon-dioxide on the road. But the energy used for their manufacture and continual battery charges certainly does—far more than most people realize.

Read the rest at: The Wall St. Journal

6 Responses to Green Cars Have a Dirty Little Secret