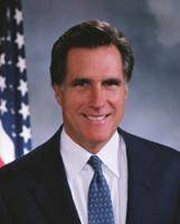 Conservatives know well that Mitt Romney has so far refused to back away from his contention that anthropogenic global warming is real, and yet the former Massachusetts governor continues to lead the Republican race for the presidential nomination. In seven debates, none of Romney’s competitors have challenged him on this position. This week, however, the blog Moonbattery found a very interesting memo from Romney’s office in 2005 announcing tough new regulations on emissions  and noting a partnership with a familiar conservative b’te noire in this administration (via Sundries Shack):

Governor Mitt Romney today announced that Massachusetts will take another major step in meeting its commitment to protecting air quality when strict state limitations on carbon dioxide (CO2) emissions from power plants take effect on January 1, 2006. …
Massachusetts is the first and only state to set CO2 emissions limits on power plants. The limits, which target the six largest and oldest power plants in the state, are the toughest in the nation…
In addition to reaffirming existing stringent CO2 limits, the draft regulations announced today, which will be filed next week, contain protections against excessive price increases for businesses and consumers. They allow power generation companies to implement CO2 reductions at their own facilities or fund other reduction projects off-site through a greenhouse gas offset and credits program.

In other words, the Romney administration in 2005 essentially did what Barack Obama’s EPA wants to do now. He imposed CO2 emission caps, “the toughest in the nation,” in an effort to curtail traditional energy production.  Not only did Romney impose these costly new regulations, he then imposed price caps to keep power companies from passing the cost along to the consumer. As we have seen in RomneyCare, regulation and price controls eventually drive businesses into bankruptcy or relocation.

And who advised Romney on these regulations? Why, none other than Obama’s chief science adviser, John Holdren…

Read the rest at Hot Air.