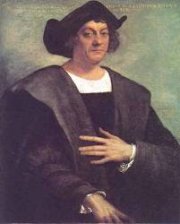 Depopulation of Americas may have cooled climate

By sailing to the New World, Christopher Columbus and the other explorers who followed may have set off a chain of events that cooled Europe’s climate for centuries.The European conquest of the Americas decimated the people living there, leaving large areas of cleared land untended. Trees that filled in this territory pulled billions of tons of carbon dioxide from the atmosphere, diminishing the heat-trapping capacity of the atmosphere and cooling climate, says Richard Nevle, a geochemist at Stanford University.

“We have a massive reforestation event that’s sequestering carbon … coincident with the European arrival,” says Nevle, who described the consequences of this change October 11 at the Geological Society of America annual meeting.

Tying together many different lines of evidence, Nevle estimated how much carbon all those new trees would have consumed. He says it was enough to account for most or all of the sudden drop in atmospheric carbon dioxide recorded in Antarctic ice during the 16th and 17th centuries. This depletion of a key greenhouse gas, in turn, may have kicked off Europe’s so-called Little Ice Age, centuries of cooler temperatures that followed the Middle Ages.

Read the rest at Science News.