By ManBearPigHunter on May 14, 2013 in Bad Policy, Cause/Effect, Global Warming ‘Solutions’, Wind Power 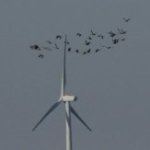 CONVERSE COUNTY, Wyo. –  The Obama  administration has never fined or prosecuted a wind farm for killing eagles and  other protected bird species, shielding the industry from liability and helping  keep the scope of the deaths secret, an Associated Press investigation has  found.

More than 573,000 birds are killed by the country’s wind farms each year,  including 83,000 hunting birds such as hawks, falcons and eagles, according to  an estimate published in March in the peer-reviewed Wildlife Society  Bulletin.

Each death is federal crime, a charge that the Obama administration has used  to prosecute oil companies when birds drown in their waste pits, and power  companies when birds are electrocuted by their power lines. No wind energy  company has been prosecuted, even those that repeatedly flout the law.