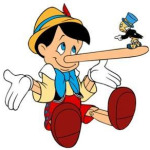 (NaturalNews) According to a pair of economists who have recently published a peer-reviewed paper in the American Journal of Agricultural Economics, lying about climate change in order to advance an extremist environmental agenda is a great idea.As reported by Breitbart News, the authors — Assistant Professors of Economics Fuhai Hong and Xiaojian Zhao — accept it as a given that the media and the science establishment routinely exaggerate the issue of climate change. However, unlike the majority of their academic colleagues — who flatly deny that any such problem exists — they go a step further and actively endorse a policy of dishonesty as a way to force through desired policy objectives.
The abstract of their paper notes:

It appears that news media and some pro-environmental organizations have the tendency to accentuate or even exaggerate the damage caused by climate change. This article provides a rationale for this tendency by using a modified International Environmental Agreement (IEA) model with asymmetric information. We find that the information manipulation has an instrumental value, as it ex post induces more countries to participate in an IEA, which will eventually enhance global welfare. From the ex ante perspective, however, the impact that manipulating information has on the level of participation in an IEA and on welfare is ambiguous.

Read the rest at: Natural News

View all posts by ManBearPigHunter →
NOT THE GINGERS! Global Warming Zealots Now Claim Redheads Will Soon Disappear
The Climate Horse Race is a Statistical Tie