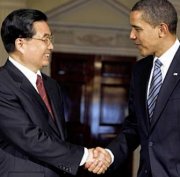 By Chris Buckley and Alister Doyle

U.S. President Barack Obama said on Tuesday next month’s climate talks in Copenhagen should cut a deal with “immediate operational effect”, even if its original aim of a legally binding pact is not achievable.

Obama was speaking after talks with Chinese President Hu Jintao in which he said the world’s top two greenhouse gas emitters had agreed to take “significant” action to mitigate their output of carbon dioxide.

“Our aim (in Copenhagen) … is not a partial accord or a political declaration but rather an accord that covers all of the issues in the negotiations and one that has immediate operational effect,” Obama said.

Denmark, host of the Dec. 7-18 climate talks, welcomed Obama’s comments and said it expected the United States and all developed nations to promise firm emissions cuts and new cash to help the poor cope with global warming, even if no treaty text could be agreed.

Danish Prime Minister Lars Lokke Rasmussen won backing on Sunday from Obama and other leaders at an Asia-Pacific summit for his scaled-down plan for a politically binding deal, with a legally binding one delayed until 2010.

“The American president endorsed our approach, implying that all developed countries will need to bring strong reduction targets to the negotiating table in Copenhagen,” he told about 40 environment ministers meeting in the Danish capital.

German Chancellor Angela Merkel was also keen that the momentum for a deal should be maintained.

“We will make very clear that we continue to support ambitious goals for Copenhagen,” she told reporters before a cabinet meeting.

“We must do everything to ensure that we move quickly to get a binding agreement. Even if this can’t be reached in Copenhagen, it can’t be pushed back forever.”

Read the rest of this article at Reuters.

4 Responses to Climate Deal Must Have Immediate Effect, Obama Says