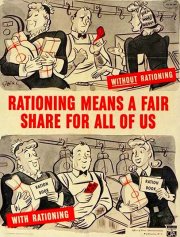 Global warming is now such a serious threat to mankind that climate change experts are calling for Second World War-style rationing in rich countries to bring down carbon emissions.

In a series of papers published by the Royal Society, physicists and chemists from some of worldâ€™s most respected scientific institutions, including Oxford University and the Met Office, agreed that current plans to tackle global warming are not enough.

Unless emissions are reduced dramatically in the next ten years the world is set to see temperatures rise by more than 4C (7.2F) by as early as the 2060s, causing floods, droughts and mass migration.

As the world meets in Cancun, Mexico for the latest round of United Nations talks on climate change, the influential academics called for much tougher measures to cut carbon emissions.

In one paper Professor Kevin Anderson, Director of the Tyndall Centre for Climate Change Research, said the only way to reduce global emissions enough, while allowing the poor nations to continue to grow, is to halt economic growth in the rich world over the next twenty years.

Read the rest at the London Telegraph.

Writer, Activist, Pilot, Communications Expert, Jack of all Trades. Websites: https://www.DanMcGrath.net | https://www.DanandTina.net
View all posts by Dan McGrath →
U.S. Corn Ethanol "Was Not a Good Policy"-Gore
What Happened To The Warmest Year On Record?