By ManBearPigHunter on December 5, 2010 in Al Gore, Junk Science 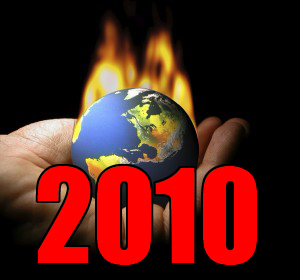 A year ago tomorrow, just before the opening of the UN Copenhagen world climate summit, the British Meteorological Office issued a confident prediction. The mean world temperature for 2010, it announced, ‘is expected to be 14.58C, the warmest on record’ – a deeply worrying 0.58C above the 19611990 average.

World temperatures, it went on, were locked inexorably into an everrising trend: ‘Our experimental decadal forecast confirms previous indications that about half the years 2010-2019 will be warmer than the warmest year observed so far – 1998.’

Met Office officials openly boasted that they hoped by their statements to persuade the Copenhagen gathering to impose new and stringent carbon emission limits – an ambition that was not to be met.
Winter’s icy grip: Drivers and pedestrians battle through blizzards in Kent last week
Last week, halfway through yet another giant, 15,000delegate UN climate jamboree, being held this time in the tropical splendour of Cancun in Mexico, the Met Office was at it again.

Never mind that Britain, just as it was last winter and the winter before, was deep in the grip of a cold snap, which has seen some temperatures plummet to minus 20C, and that here 2010 has been the coolest year since 1996.

Globally, it insisted, 2010 was still on course to be the warmest or second warmest year since current records began.

But buried amid the details of those two Met Office statements 12 months apart lies a remarkable climbdown that has huge implications – not just for the Met Office, but for debate over climate change as a whole.

Read carefully with other official data, they conceal a truth that for some, to paraphrase former US VicePresident Al Gore, is really inconvenient: for the past 15 years, global warming has stopped.

Read the full story at the UK Daily Mail

71 Responses to What Happened To The Warmest Year On Record?