By ManBearPigHunter on October 31, 2012 in Al Gore 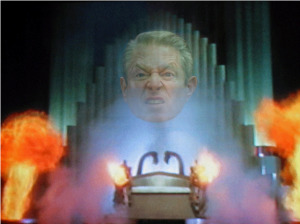 Al Gore said Tuesday that Hurricane Sandy is a “disturbing sign of things to come” in a warming world and should prompt action to curb greenhouse gas emissions from fossil fuels.

“We must heed this warning and act quickly to solve the climate crisis. Dirty energy makes dirty weather,” the former vice president said in a statement on his website.

Gore cited Sandy, which slammed ashore late Monday, and smaller-scale flooding in his hometown of Nashville two years ago, noting “both storms were strengthened by the climate crisis.”

“Scientists tell us that by continually dumping 90 million tons of global warming pollution into the atmosphere every single day, we are altering the environment in which all storms develop. As the oceans and atmosphere continue to warm, storms are becoming more energetic and powerful,” he said.

Gore also said that as Sandy approached the East Coast, it drew power from abnormally warm coastal waters and that the storm surge was worsened by sea-level rise.

“Scientists tell us that if we do not reduce our emissions, these problems will only grow worse,” he said.