By ManBearPigHunter on November 14, 2012 in Al Gore 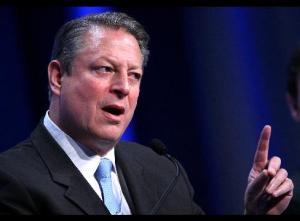 On Tuesday, Al Gore again called for a “cap and trade” system by warning Americans the country faces a “climate cliff” in addition to a “fiscal cliff.”

“It will be difficult for sure but we can back away from the fiscal cliff and the climate cliff at the same time,” Gore said. “One way is with a carbon tax.”

Gore proposed a “carbon tax swap,” where a cap and trade system would be instituted in exchange for income taxes being lowered. Even conservatives like Grover Norquist had given some credence to this idea before backing off, realizing that income taxes could be raised by future Congresses while a carbon tax — once instituted — would be nearly impossible to undo.
“The most direct policy solution to the climate crisis is a carbon tax, offset by reductions in taxes on wages,” Gore said. “By including the carbon tax in the solution to the fiscal cliff we can [get] away from the climate cliff.”

The Great and Powerful Gore Has Spoken – Sandy a “Disturbing Sign of Things to Come”
More Settled Science: Wrong about Ice Melt in Greenland, Sea-Rise