By ManBearPigHunter on June 13, 2014 in CO2, Uncategorized 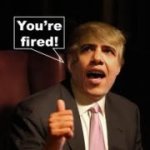 Dr. Caleb Rossiter was “terminated” via email as an “Associate Fellow” from the progressive group Institute for Policy Studies (IPS), following his May 4th, 2014 Wall Street Journal OpEd titled “Sacrificing Africa for Climate Change,” in which he called man-made global warming an “unproved science.” Rossiter also championed the expansion of carbon based energy in Africa.  Dr.  Rossiter is an adjunct professor at American University. Rossiter holds a PhD in policy analysis and a masters degree in mathematics.

In an exclusive interview with Climate Depot, Dr. Rossiter explained: “If people ever say that fears of censorship for ‘climate change’ views are overblown, have them take a look at this: Just two days after I published a piece in the Wall Street Journal calling for Africa to be allowed the ‘all of the above’ energy strategy we have in the U.S., the Institute for Policy Studies terminated my 23-year relationship with them…because my analysis and theirs ‘diverge.’”

“I have tried to get [IPS] to discuss and explain their rejection of my analysis,’ Rossiter told Climate Depot. “When I countered a claim of ‘rapidly accelerating’ temperature change with the [UN] IPCC’s own data’, showing the nearly 20-year temperature pause — the best response I ever got was ‘Caleb, I don’t have time for this.’”

Climate Depot has obtained a copy of a May 7, 2014 email that John Cavanagh, the director of IPS since 1998, sent to Rossiter with the subject “Ending IPS Associate Fellowship.”

“Dear Caleb, We would like to inform you that we are terminating your position as an Associate Fellow of the Institute for Policy Studies,” Cavanagh wrote in the opening sentence of the email.

Read the rest at: Climate Depot