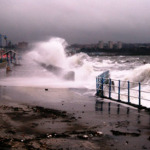 A widely reported “pause” in global warming may be an artefact of scientists looking at the wrong data, says a climate scientist at theEuropean Space Agency.

Global average sea surface temperatures rose rapidly from the 1970s but have been relatively flat for the past 15 years. This has prompted speculation from some quarters that global warming has stalled.

Now, Stephen Briggs from the European Space Agency’s Directorate of Earth Observation says that sea surface temperature data is the worst indicator of global climate that can be used, describing it as “lousy”.

“It is like looking at the last hair on the tail of a dog and trying to decide what breed it is,” he said on Friday at the Royal Society in London.

Climate scientists have been arguing for some time that the lack of warming of the sea surface is due to most of the extra heat being taken up by the deep ocean. A better measure, he said, was to look at the average rise in sea levels. The oceans store the vast majority of the climate’s heat energy. Increases in this stored energy translate into sea level rises.

Read the rest at The Guardian UK

View all posts by ManBearPigHunter →
Fired for ‘Diverging’ on Climate:
The scandal of fiddled global warming data