By ManBearPigHunter on October 14, 2012 in Real Science 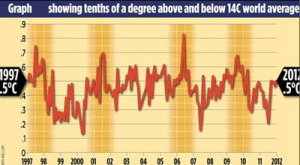 From the Daily Mail

The world stopped getting warmer almost 16 years ago, according to new data released last week.

The figures, which have triggered debate among climate scientists, reveal that from the beginning of 1997 until August 2012, there was no discernible rise in aggregate global temperatures.

This means that the ‘plateau’ or ‘pause’ in global warming has now lasted for about the same time as the previous period when temperatures rose, 1980 to 1996. Before that, temperatures had been stable or declining for about 40 years.

The new data, compiled from more than 3,000 measuring points on land and sea, was issued  quietly on the internet, without any media fanfare, and, until today, it has not been reported.

This stands in sharp contrast  to the release of the previous  figures six months ago, which went only to the end of 2010 – a very warm year.

Ending the data then means it is possible to show a slight warming trend since 1997, but 2011 and the first eight months of 2012 were much cooler, and thus this trend is erased.

Is this what global warming looks like? Over 2000 new low temperature records set in October
Another Obama Admin "Green Job" Company Goes Bankrupt