By Dan McGrath on September 15, 2011 in Junk Science, Mythical Consensus 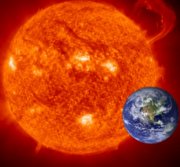 The global warming theory left him out in the cold.

Dr. Ivar Giaever, a former professor with Rensselaer Polytechnic Institute and the 1973 winner of the Nobel Prize in physics, abruptly announced his resignation Tuesday, Sept. 13, from the premier physics society in disgust over its officially stated policy that “global warming is occurring.”

The official position of the American Physical Society (APS) supports the theory that man’s actions have inexorably led to the warming of the planet, through increased emissions of carbon dioxide.Â

Giaever does not agree — and put it bluntly and succinctly in the subject line of his email, reprinted at Climate Depot, a website devoted to debunking the theory of man-made climate change.

“I resign from APS,” Giaever wrote.

Giaever was cooled to the statement on warming theory by a line claiming that “the evidence is incontrovertible.”

“In the APS it is ok to discuss whether the mass of the proton changes over time and how a multi-universe behaves, but the evidence of global warming is incontrovertible?” he wrote in an email to Kate Kirby, executive officer of the physics society.