By ManBearPigHunter on November 29, 2012 in Junk Science, Science, Sea Levels 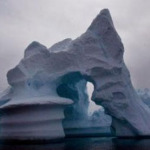 New research published in the Proceedings of the National Academy of Sciences tends to now show that ice melt estimates previously calculated for Greenland have not significantly accelerated- as has been previously postulated- nor has the melt contributed in a meaningful way to the rise of sea levels.

Recently, much of the destruction on the east coast as a consequence of Super-Mega-Hurricane Sandy Gore was blamed on the rise in sea-levels, which have been blamed on…drum roll…global warming.

Read the rest at: Townhall.com