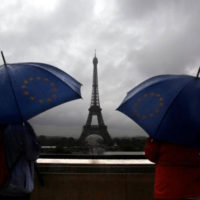 Obama has done it, he has fulfilled his promise to  “fundamentally transform the United States” making it part of a UN World Government by signing the Paris Climate Treaty last December without Congressional approval. In one month the US will lose its sovereignty and will have to answer to the UN when it comes to its energy use.

Now that Obama and the UN have achieved World Government with the fake threat of Global Warming I wonder if the Globe will magically start cooling off. They have fudged the data about as far as they can go to build the narrative that every year is the hottest ever. I predict they will start fudging the data the other way so they can say that World Government saved the planet. Especially with statements like this “The Paris Agreement’s credibility test starts today”, wink, wink.

A sweeping global agreement to combat climate change by shifting the world economy away from fossil fuels will take force next month after passing a threshold for ratification on Wednesday with support from European nations.

Support for the Paris Agreement has widened to nations representing 56.75 percent of world greenhouse gas emissions, above the 55 percent needed for implementation, a U.N. website showed. The deal will formally start in 30 days.

European Union countries including Germany, France and Slovakia, which have completed domestic ratification, helped trigger the formal entry into force after a green light from the European Parliament on Tuesday.

The agreement, reached in December 2015, already has support from other major emitters led by China, the United States and India. In total, 72 countries out of 195 have ratified the agreement, according to the U.N. website.

It took eight years for the previous U.N. climate deal, the 1997 Kyoto Protocol that obliged only rich nations to cut emissions, to gain enough backing to take effect.

Entry into force “demonstrates unprecedented political momentum for climate action and bodes well for us moving forward”, said Thoriq Ibrahim, Environment Minister for the Maldives and Chair of the Alliance of Small Island States.

But he urged stronger action against global warming, saying “it is no exaggeration to say we are in a race against time”.

The Paris Agreement will take force just before the U.S. presidential election on Nov. 8. Republican Donald Trump opposes the accord while Democrat Hillary Clinton is a strong supporter.

Paul Polman, CEO of Unilever and Chairman of the World Business Council for Sustainable Development, said ratification showed that a shift to a low-carbon economy is “urgent, inevitable, and accelerating faster than we ever believed possible”.

But current national pledges for cuts in emissions are insufficient to achieve a Paris goal of limiting a rise in world temperatures to “well below” two degrees Celsius (3.6 Fahrenheit) above pre-industrial times.

U.N. studies project that average world temperatures are set to rise by 3 degrees (5.4 Fahrenheit) or more by 2100, based on current trends. And this year is expected to prove the warmest since records began in the 19th century, beating 2015.