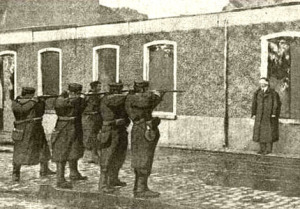 A public appeal has been issued by an influential U.S. website asking: â€œAt what point do we jail or execute global warming deniers.â€ The appeal appeared on Talking Points Memo, an often cited website that helps set the agenda for the political Left in the U.S. The anonymous posting, dated June 2, 2009, referred to dissenters of man-made global warming fears as â€œgreedy bastardsâ€ who use â€œbogus science or the lowest scientists in the gene poolâ€ to â€œdistort data.â€

The Talking Points Memo article continues: â€œSo when the right wing f***tards have caused it to be too late to fix the problem, and we start seeing the devastating consequences and we start seeing end of the World type events – how will we punish those responsible. It will be too late. So shouldn’t we start punishing them now?”

50 Responses to 'Execute' Skeptics! Shock Call To Action: 'At what point do we jail or execute global warming deniers' — 'Shouldn't we start punishing them now?'