By Dan McGrath on November 5, 2010 in Extremists, Loonies 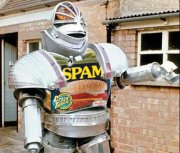 An Australian software developer grew tired of debating climate realists on Twitter so he created spambot to wear down his opponents. The bot responds to anyone who expresses skepticism about man-made global warming by posting one of hundreds of canned replies in an attempt to frustrate skeptics.

Nigel Leck, an Australian software developer, grew tired of debating climate realists on Twitter so he created a spambot to â€œwear downâ€ his opponents. The bot, @AI_AGW, scans Twitter every five minutes looking for key phrases commonly used by those who challenge the global warming orthodoxy.Â  It then posts one of hundreds of canned responses hoping to frustrate skeptics. CFACTâ€™s Twitter account @CFACT (follow us!) often receives many of these unsolicited messages each day. Since the bot became active on May 26, 2010, it has sent out over 40,000 tweets, or an average of more than 240 updates per day!

Technology Review gushed that Leck’s bot â€œanswers Twitter users who aren’t even aware of their own ignorance.â€Â  Leck claims that his little bit of trollware is commonly mistaken as a genuine Twitter user leading the unsuspecting to sometimes debate it for days. Eventually it wears people down.

Leck’s bot is an innovative, yet appalling new tactic in the ongoing campaign by global warming proponents to stifle debate and end discussion of climate science and policy. Spamming Twitter users is a tactic that is likely to backfire, as have so many of the ploys alarmists have tried in the past. There is nothing internet users find more annoying than trolls using spam to shut down online discussions.Â

Read the rest at CFACT.