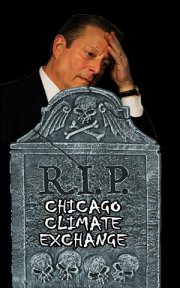 The CCX was the topic of thousands of MSM articles over the years, but not a single article reported their recent demise. Hmmm.

Global warming-inspired cap and trade has been one of the most stridently debated public policy controversies of the past 15 years. But it is dying a quiet death. In a little reported move, the Chicago Climate Exchange (CCX) announced on Oct. 21 that it will be ending carbon trading â€” the only purpose for which it was founded â€” this year.

Although the trading in carbon emissions credits was voluntary, the CCX was intended to be the hub of the mandatory carbon trading established by a cap-and-trade law, like the Waxman-Markey scheme passed by the House in June 2009.

At its founding in November 2000, it was estimated that the size of CCXâ€™s carbon trading market could reach $500 billion. That estimate ballooned over the years to $10 trillion.

Read the rest at Pajamas Media.