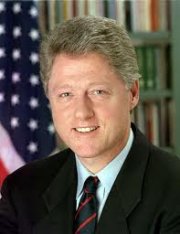 Bill Clinton turned up the heat on the leading Republican presidential contenders Tuesday, saying their opposition to acknowledging climate change makes the country â€œlook like a joke.â€

â€œIf youâ€™re an American, the best thing you can do is to make it politically unacceptable for people to engage in denialâ€ about climate change, the former president said on the first day of the Clinton Global Initiativeâ€™s seventh annual meeting in New York City.

â€œI mean, it makes us â€” we look like a joke, right? You canâ€™t win the nomination of one of the major parties in the country if you admit that the scientists are right? That disqualifies you from doing it? You could really help us there,â€ Clinton added.

Kicking off the three-day conference, Clinton called the lack of debate in America on climate change â€œreally tragic.â€

Read the rest at Politico.