By ManBearPigHunter on December 18, 2009 in Copenhagen Treaty

From the UK Telegraph 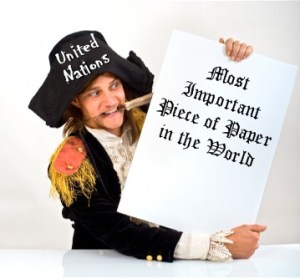 By Gerald Warner — When your attempt at recreating the Congress of Vienna with a third-rate cast of extras turns into a shambles, when the data with which you have tried to terrify the world is daily exposed as ever more phoney, when the blatant greed and self-interest of the participants has become obvious to all beholders, when those pesky polar bears just keep increasing and multiplying â€“ what do you do?

No contest: stop issuing three rainforests of press releases every day, change the heading to James Bond-style â€œDo not distributeâ€ and â€œleakâ€ a single copy, in the knowledge that human nature is programmed to interest itself in anything it imagines it is not supposed to see, whereas it would bin the same document unread if it were distributed openly.

After that, get some unbiased, neutral observer, such as the executive director of Greenpeace, to say: â€œThis is the single most important piece of paper in the world today.â€ Unfortunately, the response of all intelligent people will be to fall about laughing; but it was worth a try â€“ everybody loves a tryer â€“ and the climate alarmists are no longer in a position to pick and choose their tactics.

But boy! Was this crass, or what? The apocalyptic document revealing that even if the Western leaders hand over all the climate Danegeld demanded of them, appropriately at the venue of Copenhagen, the earth will still fry on a 3C temperature rise is the latest transparent scare tactic to extort more cash from taxpayers. The danger of this ploy, of course, is that people might say â€œIf we are going to be chargrilled anyway, what is the point of handing over billions â€“ better to get some serious conspicuous consumption in before the ski slopes turn into saunas.â€

This â€œsingle most important piece of paper in the worldâ€ comes, presumably, from an authoritative and totally neutral source? Yes, of course. Itâ€™s from the â€“ er â€“ UN Framework Committee on Climate Change that is â€“ er â€“ running the Danegeld Summit. Some people might be small-minded enough to suggest this paper has as much authority as a â€œleakedâ€ document from Number 10 revealing that life would be hell under the Tories.

This week has been truly historic. It has marked the beginning of the landslide that is collapsing the whole AGW imposture. The pseudo-science of global warming is a global laughing stock and Copenhagen is a farce. In the warmist camp the Main Man is a railway engineer with huge investments in the carbon industry. That says it all. The worldâ€™s boiler being heroically damped down by the Fat Controller. Al Gore, occupant of the only private house that can be seen from space, so huge is its energy consumption, wanted to charge punters $1,200 to be photographed with him at Copenhagen. There is a man who is really worried about the planetâ€™s future.

If there were not $45trillion of Western citizensâ€™ money at stake, this would be the funniest moment in world history. What a bunch of buffoons. Not since Neville Chamberlain tugged a Claridgeâ€™s luncheon bill from his pocket and flourished it on the steps of the aircraft that brought him back from Munich has a worthless scrap of paper been so audaciously hyped. There was one good moment at Copenhagen, though: some seriously professional truncheon work by Danish Plod on the smellies. Otherwise, this event is strictly for Hans Christian Andersen

22 Responses to Copenhagen Climate Summit: 'most important paper in the world' is a glorified UN press release