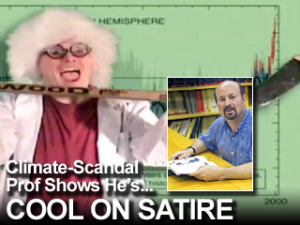 The Penn State climate professor who has silently endured investigations, hostile questioning, legislative probes and attacks by colleagues has finally spoken out. He says he’ll sue the makers of a satirical video that’s a hit on You Tube.

Their response: Bring it on.

Michael Mann, one of the central figures in the recent climate-data scandal, is best known for his “hockey stick graph,” which was the key visual aid in explaining how the world is warming at an alarming rate and in connecting the rise to the increase in use of carbon fuels in this century. E-mails stolen from a university in England were released online, revealing exchanges between climatologists and a reference to a “trick” that Mann had used to get the graph to portray what global warming scientists wanted to see.Â

The parody video, titled “Hide the Decline,” had more than 500,000 viewers on YouTube and received national attention when Rush Limbaugh played it on his radio show. It features a cat with a guitar, a talking tree, and a dancing figure sporting the image of Professor Mann. It’s the use of his image that Mann is complaining about, arguing that the video supports “efforts to sell various products and merchandise.”

“The guy is crazy to threaten legal action,” said Jeff Davis, the President of No Cap and Trade, a large organization that includes the group Mann is threatening to sue, Minnesotans for Global Warming. “A lawsuit would give us full discovery — and there’s a lot to look at in his work.”