By Dan McGrath on May 22, 2013 in Climate History, Michael Mann, Scaremongering 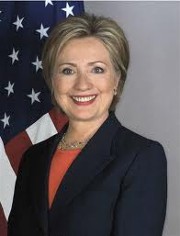 You know the global-warming fanatics have hit a low point when they’re reduced to asking Benghazi Rodham Clinton and an antique actor to shovel their silly propaganda.

One more time, for the benefit of anyone who remains honestly bamboozled by this nonsense: THERE IS NO CLIMATE CHANGE. None of the doomsday predictions, from blatant frauds like Michael Mann’s “hockey stick graph” to relatively serious efforts at climate modeling, have held up. There’s hard data now, and the hard data is disastrous for these fanatics and their anti-growth ideology. Climate scientists are currently spending their days fretting about a bit of global cooling, caused entirely by natural forces, and wondering if a tiny bit of heating from human activity might have been beneficial because it staved off the new Ice Age.

Read the rest at Breitbart.