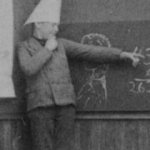 “The Earth has a fever,” we were told. “The science is settled and the debate is over. Scientists are unanimous – 97% of them agree: climate change is real, and is happening now, and we’ve got to act quickly.”

Over more than two decades we were told again and again that everywhere was warming faster than everywhere else – especially winters were warming up quickly. Snow was becoming a thing of the past and children soon weren’t going to know what it is.  “The warm winters that we are seeing are just a harbinger of what’s to come,” the media declared just a couple of years ago. The scientists were cock-sure.

Today we are finding that precisely the exact opposite is happening. Winters in Europe have turned colder and more severe. Central Europe has seen its 5th consecutive colder than normal winter in a row – a record since measurements began in the 19th century.

View all posts by ManBearPigHunter →
HOW THE HOCKEY STICK CRUMBLED: A POST MORTEM
Climate scientists struggle to explain warming slowdown