By ManBearPigHunter on April 4, 2013 in Uncategorized

Posted at Powerlineblog.com by John Hinderaker 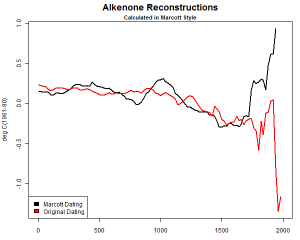 Last month, a group of scientists headed by geologist Shaun Marcott launched the latest salvo in the global warming war. They announced that they had reconstructed the last 11,000 years of Earth climate history, based on various proxies, and had found that in the 20th century there was an unprecedented uptick in temperature. The Marcott paper was hailed by liberal media outlets; to cite just a few examples:

* “We’re screwed: 11,000 years’ worth of ­climate data prove it.” The Atlantic, March 10.
* “The modern rise that has recreated the temperatures of 5,000 years ago is occurring at an exceedingly rapid clip on a geological time scale, appearing in graphs in the new paper as a sharp vertical spike.” Justin Gillis, New York Times, March 7.
* “’Rapid’ head spike unlike anything in 11,000 years. Research released Thursday in the journal Science uses fossils of tiny marine organisms to reconstruct global temperatures…. It shows how the glode for several thousands of years was cooling until an unprecedented reversal in the 20th century.” The Associated Press, March 7.

But when real scientists–that is, those who apply a skeptical, scientific approach rather than a religious attitude of fervor–studied the Marcott paper, it quickly fell apart.

Read the rest at Powerlineblog.com

View all posts by ManBearPigHunter →
Global Warming: Was It Just A Beautiful Dream After All?
Climate Science Humiliated…Earlier Model Prognoses Of Warmer Winters Now Today’s Laughingstocks