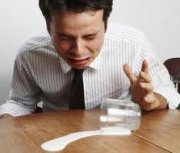 From the University of Edinburgh

Scientists say the 360,000 tonnes of milk wasted in the UK each year creates greenhouse gas emissions equivalent to 100,000 tonnes of CO2. The study by the University of Edinburgh says this is the same as is emitted by about 20,000 cars annually.

The research identifies ways that consumers could also help curb greenhouse gas emissions – by reducing the amount of food they buy, serve and waste. They also suggest the food industry could reduce emissions by seeking more efficient ways to use fertilisers.

Researchers also say halving the amount of chicken consumed in the UK and other developed countries to levels eaten in Japan could cut greenhouse gas emissions equivalent to taking 10 million cars off the road.

Read the rest at Phys.org.

View all posts by Dan McGrath →
Did dinosaurs cause climate change? Huge creatures may have contributed to their own demise because they produced so much flatulence, say scientists
MSM Condemns Heartland’s Experimental Billboard, Ignores What Climate Alarmists Do Everyday