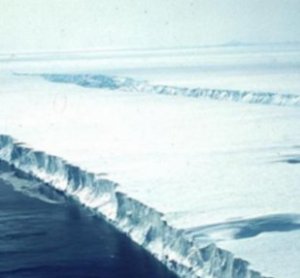 Scientists at the British Antarctic Survey say that the melting of the Pine Island Glacier ice shelf in Antarctica has suddenly slowed right down in the last few years, confirming earlier research which suggested that the shelf’s melt does not result from human-driven global warming.

The Pine Island Glacier in West Antarctica and its associated sea ice shelf is closely watched: this is because unlike most of the sea ice around the austral continent, its melt rate has seemed to be accelerating quickly since scientists first began seriously studying it in the 1990s.

Many researchers had suggested that this was due to human-driven global warming, which appeared to be taking place rapidly at that time (though it has since gone on hold for 15 years or so, a circumstance which science is still assimilating).

However back in 2009 the British Antarctic Survey sent its Autosub robot probe under the shelf (famously powered by some 5,000 ordinary alkaline D-cell batteries on each trip beneath the ice, getting through no less than four tonnes of them during the research). The Autosub survey revealed that a previously unknown marine ridge lay below the shelf, over which the icepack had for millennia been forced to grind its way en route to the ocean. However in relatively recent times the ice had finally so ground down the ridge that the sea could flow in between shelf and ridge, freeing the ice to move much faster and warming it too.

Read the rest at The Register.

10 Responses to Antarctic ice shelf melt 'lowest EVER recorded, global warming is NOT eroding it'