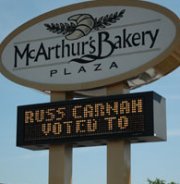 A growing number of business owners and taxpayers are mobilizing nationwide against the House-approved cap-and-trade energy bill, which would reduce energy consumption but could raise energy prices and harm small businesses

The revolution will not be televised: it’s been blinking along on a giant bakery sign in St. Louis, Mo., instead.

Fed up with his congressman’s vote on a sweeping climate-change bill that passed the House of Representatives in late June, the proprietor of McArthur’s Bakery took to his street sign and posted a clear message to all passersby:

“Russ Carnahan voted to … close us and other … small business.”

David McArthur, vice president of the 52-year-old family operation, a Gateway City institution, is one of a growing number of business owners and taxpayers nationwide who are mobilizing against the so-called cap-and-trade bill, which would levy harsh fines on energy consumption that harms the environment.

McArthur told FOXNews.com that every aspect of his business relies on the forms of energy targeted by the American Clean Energy and Security Act, and that his congressman, Carnahan, was supporting “a direct tax increase on small business” by voting for it.

“We make (our product) with electricity, we bake it with gas, we refrigerate and freeze it with electricity and we distribute it with gas and oil,” said McArthur, who said he worries that high prices could cost his company up to $15,000 a year in an industry with a very tight margin for profit.

Read the rest of this story at Fox News.

Writer, Activist, Pilot, Communications Expert, Jack of all Trades. Websites: https://www.DanMcGrath.net | https://www.DanandTina.net
View all posts by Dan McGrath →
Sen. Inhofe Calls for Inquiry Into Suppressed Climate Change Report
It's Getting Cold Out There