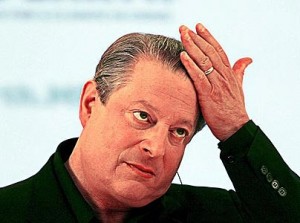 Despite complaints from the oil industry, livestock producers, environmental groups and a whole host of others, the Environmental Protection Agency has increased the amount of biofuels refiners are required to blend into the fuel supply every year.

The agency two years late, and mandating that 17.40 billion gallons of biofuels — cellulosic, biomass-based and advanced fuels — be blended into U.S. fuel supplies. The EPA and ethanol producers celebrated the announcement, but they seem to be the only ones as most other interest groups oppose the mandate in its current form.

“We calculate that the corn ethanol mandate has been worse for the climate than projected emissions from the controversial Keystone XL pipeline,” wrote Emily Cassidy, a researcher with the Environmental Working Group. “What makes matters worse is that the EPA just mandated that more corn ethanol must go into American gas tanks.”

One Response to EPA Biofuel Policy In Shambles, So It Mandates More Ethanol