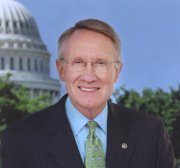 Harry Reid’s latest energy bill is designed not to pass

President Obama’s undeniable success in passing liberal legislation hasn’t translated into greater popularity for himself or the Democratic Congress. So perhaps he’ll get a bump in the polls now that he’s suffered his first setback on one of his signature promises.We refer to the failure of cap and tax, which Mr. Obama once modestly promised would signal “the moment when the rise of the oceans began to slow and our planet began to heal.” Senate Majority Leader Harry Reid gave the plan, if not the planet, up for dead this month, and last week he unveiled a new energy bill whose major provisions include a Cash for Clunkers replay for home appliances and a $5.8 billion subsidy for natural gas vehicles.

In other words, the green lobby has suffered a landmark defeat, and the recriminations in the liberal press are remarkable. Either Mr. Obama didn’t sell it well enough, perfidious Big Business intervened (never mind that many CEOs were supporters), the obtuse middle class won’t sacrifice for the global good, or evil Republicans . . . Everyone is to blame but the policy itself.

In fact, the bill went down for lack of Democratic votes, in particular those from Midwest coal and manufacturing states. Voters in those states have figured out that cap and tax is a redistributionist exercise from the carbon-dependent heartland to the richer coasts. A Democrat-Jay Rockefeller of West Virginia-is also leading the charge to repeal the EPA’s climate “endangerment” regulation that imposes cap and trade though the backdoor.

26 Responses to The Death of Cap and Tax