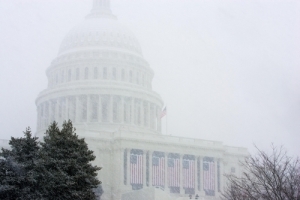 Amid the growing fight over the accuracy of climate data, President Obama is seeking to have the federal government put its imprimatur on the science by calling for the creation of a new federal office to study and report on global warming.

“This service will be a vital part of our growing body of knowledge on climate change, and will be held to the highest standards of scientific integrity and transparency,” said Rep. Edward J. Markey, Massachusetts Democrat and chairman of the Select Committee on Energy Independence and Global Warming.

The NOAA Climate Service office, which requires requires congressional committee approval, has been under development for years and is not designed to stem controversies over the accuracy of climate data, according to NOAA officials. It will cull existing data and programs from various Commerce offices under one roof.

But the proposed office does fall in line with the administration’s effort to act on climate change in Congress and on the world stage. In Congress, the push for capping emissions of carbon dioxide, which some scientists say is causing global warming, has stalled in the Senate.

World leaders, spurred by Mr. Obama, failed to craft a cohesive response to climate changes at the United Nations’ Copenhagen conference in December. They did come up with a non-binding deal that leaders called a “first step” to stemming greenhouse gas emissions.

Mr. Locke said changes to the Earth’s temperatures threaten to melt polar ice caps, raise sea levels, threaten farmers’ crops and change weather patterns. Last month, the National Climatic Data Center reported that the decade that ended in 2009 was the warmest on record worldwide, surpassing the 1990s. Many scientists believe human activity has played a substantial role in the changes.

But others question the legitimacy of that research. The United Nations’ climate talks were overshadowed by the revelation of documents that purportedly showed several prominent researchers selected data that supported their theory that humans caused climate change.

Read the rest of this article at Washington Times.