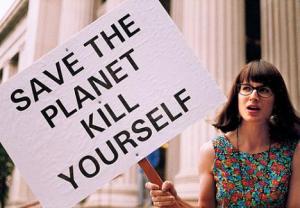 It’s not the growing number of people in poverty who are causing climate change, it’s the rich

The worst thing that you or I can do for the planet is to have children. If they behave as the average person in the rich world does now, they will emit some 11 tonnes of COÂ² every year of their lives. In their turn, they are likely to have more carbon-emitting children who will make an even bigger mess. If Britain is to meet the government’s target of an 80% reduction in our emissions by 2050, we need to start reversing our rising rate of population growth immediately.

And if that makes sense, why not start cutting population everywhere? Are condoms not the greenest technology of all?

World population is forecast to peak at 9.2bn by 2050. According to a report by the LSE for the Optimum Population Trust, the lobbying body currently asking parents to “Stop at Two”, it would cost $220m to provide the family planning that would reduce the 2050 population by half a billion, preventing the emission of 34 gigatonnes of carbon. Introducing low-carbon technology for the same result would cost more than $1 trillion.

So why does population control hardly feature on the agendas of the UN bodies or of the governments now committed to tackling climate change? And why do the development and environmental groups shy away from it? The Guardian’s George Monbiot dismisses the topic as a distraction, the obsession largely of “post-reproductive, middle-class white menâ€¦ a group more responsible for environmental destruction than any other class in history”. David King, the government’s former chief scientific adviser, argues: “The only way to tackle climate change is to change the way energy is used by those of us that have already been born.”

It is certainly true that “fewer people equals a greener planet” is simplistic. In 2050, 95% of the extra population will be poor and the poorer you are, the less carbon you emit. By today’s standards, a cull of Australians or Americans would be at least 60 times as productive as one of Bangladeshis.

As a result, NGOs such as Oxfam, for whom I’ve just written a report on climate change’s impact on humans, insist that dealing with consumption in the rich world is much more important than tackling population growth. According to the International Energy Agency, if the whole world moved over to clean electricity, the COÂ² savings would offset the emissions of up to 2.8bn poor people, easily accounting for the entire extra population forecast for 2050.

But what if we can’t reform the way we produce and use energy? The most worrying of climate change’s impacts â€“ food and water shortages, forced migration, health epidemics â€“ are exacerbated by population growth. According to two recent polls, nine out of 10 scientists working in climate change don’t believe we will achieve the changes in energy use committed to by the G8 and the EU. If they are right, population is going to start to matter a lot. Don’t we need a fallback plan?

Read the rest of this piece at The Guardian.

22 Responses to Fewer British Babies Would Mean a Fairer Planet