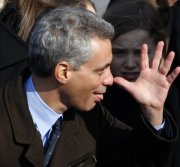 President Obama’s chief of staff opened the door on Friday for a limited Senate climate bill that focuses on capping greenhouse gases from power plants.

Rahm Emanuel told the Wall Street Journal that “a whole range of ideas will be discussed” when Obama hosts senators at the White House next Wednesday, including placing a mandatory limit solely on the heat-trapping emissions from electric utilities.

“The idea of a â€˜utilities only’ [approach] will also be welcomed,” Emanuel told the newspaper in an interview.

Read the rest at Politico.