By ManBearPigHunter on October 12, 2012 in Al Gore 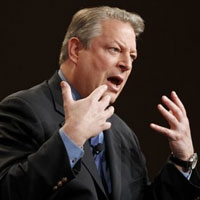 Despite the well-known failures and struggles of the renewable energy sector, former Vice President Al Gore has managed to profit handsomely from multiple “green” energy investments, according to a lengthy and surprisingly revealing Washington Post article.

And when we say he has done well, we mean he has done really, really well. Take, for instance, the fact that since getting into the business in 2000, Gore’s personal wealth has grown by approximately $98 million:

Gore charted this path by returning to his longtime passion — clean energy. He benefited from a powerful resume and a constellation of friends in the investment world and in Washington. And four years ago, his portfolio aligned smoothly with the agenda of an incoming administration and its plan to spend billions in stimulus funds on alternative energy.

3 Responses to Despite Industry-Wide Woes, Al Gore Has Made a Killing in ‘Green’ Energy