By ManBearPigHunter on July 25, 2012 in Uncategorized 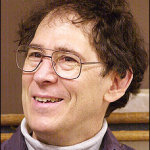 Stephen H. Schneider, 65, an influential Stanford University climatologist who parlayed his expertise on the dangerous effects of greenhouse-gas emissions into a second career as a leader in the public dialogue — and debate — on climate change, died July 19 in London.

His wife, Stanford biologist Terry Root, wrote in an e-mail to colleagues that her husband had died after an apparent heart attack on an airplane en route to London from Stockholm.

Dr. Schneider wrote books and more than 400 articles on human-driven global warming and its wide-ranging effects, such as a recorded rise in ocean temperature and the increasing potency and frequency of hurricanes. He conducted research on the near-irreversible damage of greenhouse gases on the ozone layer and theorized how a nuclear war might affect the climate.

View all posts by ManBearPigHunter →
Answer to speedy tree growth lies in air pollution, Auburn University study shows
New study shows half of the global warming in the USA is artificial