By Dan McGrath on June 3, 2010 in Uncategorized 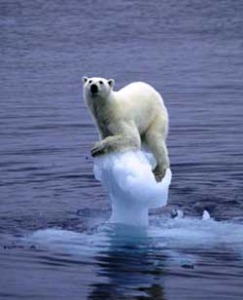 The Nunavut government does not think the polar bear should be classified as a species of special concern under the federal Species at Risk Act, says territorial Environment Minister Daniel Shewchuk.

Shewchuk said there is no clear evidence to support assigning that status to the polar bear despite recommendations to the contrary by Environment Canada and a federal scientific panel.

“We live in polar bear country,” Shewchuk told reporters in Iqaluit on Friday afternoon. “We understand the polar bears, and we do actually think our polar bear population is very very healthy, with the exception of a couple of populations that we are taking action on.”

The polar bear was most recently designated a species of special concern in 2002. “Of special concern” is the least serious “at risk” designation – one level below “threatened” and two levels below “endangered.”

Currently, the special-concern designation has been suspended while the government reviews the polar bear’s status and decides whether to renew the classification or change it.

An arm’s length scientific panel, the Committee on the Status of Endangered Wildlife in Canada (COSEWIC), reviewed the polar bear’s status in 2008 and recommended that it remain in the special-concern category.

The recommendation has initiated a long process of hearings and consultations, including a round of hearings in Nunavut in April.

Environment Canada is expected to decide in a couple of months whether to renew the special concern status.

Shewchuk said while the Nunavut government originally agreed with the special-concern listing, it changed its position after consulting with Inuit hunters and others on a recent community tour.

“Through direct consultation, they are unanimous in their belief that polar bears have not declined,” Shewchuk said.

Read the rest of this story at CBC.

39 Responses to Polar Bears Not at Risk: Nunavut