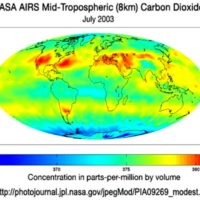 By ManBearPigHunter on February 3, 2017 in Opinion, Science

We have been lied to: Carbon dioxide (CO2) is an alleged ‘well-mixed gas’ also alleged to reside in sufficient quantities high in the atmosphere to cause global warming (via the so-called greenhouse gas effect). But as President Trump looks to help dismantle the hoax there is much inconvenient science at hand to help his administration discredit this ‘theory’ beloved by climate alarmists.

The first damaging fact to the theory: CO2 is actually a heavy gas. It is not ‘well mixed’ in the air as per the glib claim.  Just check out the NASA image (above) showing widely varying carbon dioxide concentrations. Indeed, schoolchildren are shown just how heavy CO2 is by way of a simple school lab experiment. This heavy gas thus struggles to rise and soon falls back to earth due to its Specific Gravity (SG). Real scientists rely on the SG measure which gives standard air a value of 1.0 where the measured SG of CO2 is 1.5 (considerably heavier). Thus,  in the real world the warming theory barely gets off the ground.

As shown  in Carbon Dioxide Not a Well Mixed Gas and Can’t Cause Global Warming the same principle applies to heat transfer: the Specific Heat (SH) of air is 1.0 and the SH of CO2 is 0.8 (thus CO2 heats and cools faster).  Combining these properties allows for thermal mixing. Heavy CO2 warms faster and rises, as in a hot air balloon.  It then rapidly cools and falls. Once it falls it loses any claimed climate impact.

View all posts by ManBearPigHunter →
American Youth Indoctrinated Under Pretense Of Environmental
Exposed: How world leaders were duped into investing billions over manipulated global warming data