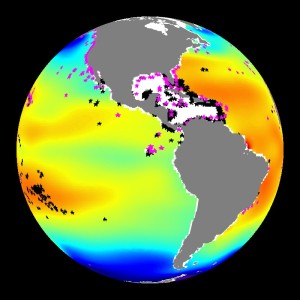 From Buy the Truth

The evidence is inexorably mounting that the climate alarmists have been taking us all for a ride. It is only be a matter of time before their agenda is exposed as one of the biggest con tricks of all time. Thus they are already scrambling to breathe new life into the CO2 emissions scare. It will become obvious (by the passage of years if nothing else) that increasing carbon dioxide in the atmosphere does not, after all, cause any significant climate change, thus it will be necessary to blame CO2 (and hence man) for some other catastrophic event. So, prepare yourself for the coming “ocean acidification” scam.

The media have already entered the fray with lying narratives that sound like science fiction scripts, warning about the catastrophe of “acid oceans” and “toxic seas.” The BBC have churned out headlines such as “Marine life faces ‘acid threat’,” Acid oceans “need urgent action” and “Acidic seas fuel extinction fears.” Newspapers such as the Daily Telegraph and the Times have got in on the act with scary headlines such as “Mussels face extinction as oceans turn acidic”, “Pollution to devastate shellfish by turning seas acidic” and “Acid seas threaten to make British shellfish extinct”. Just recently, it has got all the more strident: the Sunday Times (March 8, 2009) chimes in under the headline The toxic sea:

Each one of us dumps a tonne of carbon dioxide into the oceans every year, turning them into acidified soups and threatening to destroy most of what lives in them.

And from the Guardian (March 10, 2009) under the headline Carbon emissions creating acidic oceans not seen since dinosaurs:

Human pollution is turning the seas into acid so quickly that the coming decades will recreate conditions not seen on Earth since the time of the dinosaurs. The rapid acidification is caused by the massive amounts of carbon belched out from chimneys and exhausts that dissolve in the ocean. the pH of surface waters, where the CO2 is absorbed from the atmosphere, has fallen about 0.1 units since the industrial revolution, though it will take longer for the acid to reach deeper water.

Note the continual use of the word acid. Yet there is not the slightest possibility that seawater will turn to acid, or even become mildly acidic, so this is drivel. Note also the claim that pH has changed by 0.1 units over the last 200 years: it was not possible a hundred years ago, never mind 200 years ago, to measure pH to the accuracy necessary to support that assertion, so it’s just posturing. Finally, notice that CO2 is branded “human pollution”, though CO2 is an entirely natural and absolutely essential nutrient for plant photosynthesis, without which all life on earth would certainly become extinct very quickly.

As an aside, we should note that if lower alkalinity per se were so unfavourable to shellfish as is claimed then we would have no freshwater shellfish and snails,  but we do. The freshwater mussel has lived for thousands of years in waters that are genuinely acidic and with highly variable pH, not only seasonally, but geographically. With spring snowmelt and high rainfall, the pH of rivers and lakes can fall to below pH 5, and experiments have shown that mussels can survive this acidity indefinitely without any deleterious effects to their shells. Note: a pH of 5 has 1,000 times as many “acidic” H+ ions per litre as seawater, and 100 times more than pure water. This is not to say that sea creatures can survive in fresh water – they are adapted to a radically different saline environment – the point at issue is that the idea of a small change in ocean pH due to increased dissolved carbon dioxide having a deleterious effect on marine shells of living organisms is not as obvious as the alarmists make out.

Read the rest at Buy the Truth.