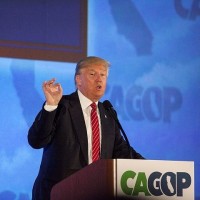 By ManBearPigHunter on May 5, 2016 in EPA, Opinion

If he lives up to his campaign rhetoric, a President Donald Trump would be a nightmare for the Environmental Protection Agency, radical environmentalism and the mandate- and subsidy-dependent “green” energy racket.

I have paid close attention this campaign season to what every candidate has said about environmental issues. Almost all 17 of the Republican candidates strongly opposed Obama’s war on coal, the job-killing EPA, and global warming hysteria. But Trump has exhibited something else — unusually keen insight into and visceral dislike for green extremism, especially as inflicted upon us by the Obama administration.

On global warming, Trump has repeatedly stated or tweeted as follows:

17 Responses to Trump-ing Hillary on EPA and Global Warming